bride of Christ, cross and nail, Ezekiel 9:4-6, I Peter 4:17, judgment begins in the house of God, mark on the forehead, tav

I received an interesting email from Worthy News.  George Whitten put together an excellent devotional on the letter tav.  Enjoy!

Ezekiel 9:4-6 and the Lord said to him, “Go through the midst of the city, through the midst of Jerusalem, and put a mark (Tav in Hebrew) on the foreheads of the men who sigh and cry over all the abominations that are done within it.”  To the others He said in my hearing, “Go after him through the city and kill; do not let your eye spare, nor have any pity.  Utterly slay old and young men, maidens and little children and women; but do not come near anyone on whom is the mark (Tav in Hebrew); and begin at My sanctuary.” So they began with the elders who were before the temple.
Yesterday, we began identifying the ancient Hebrew alphabet and exploring the potential symbolic meanings of its letters. The last letter, “Tav”, as we saw, strongly resembles a cross. Today, we’re going to look at how “Tav” is spelled in ancient Hebrew. The phonetic spelling of “Tav” is  Tav (T)-Vav (V).  Now the ancient letter, “Vav” strongly resembled a commonly used tent-peg, and then, later, a common nail. So t 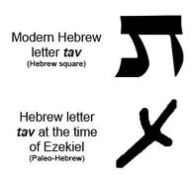 he spelling of “Tav” contains a cross and a nail.

This word in Hebrew is translated, “mark“, in the verses above; so, this ancient Hebrew “mark” that was on the foreheads of righteous men who grieved over abominations in the Lord’s house, was identified by a word containing a cross and a nail. Interesting…since the prophet is told to pass over all those that have that mark, beginning at the Lord’s sanctuary, we have an Old Testament picture of the protection of the Lord’s cross, expressed by ancient Hebrew letters. Perhaps this is just another way in which the Lord has expressed His sovereignty, weaving His revelation into the entire fabric of His Word, revealing the protection of the cross in both the Old and New Testaments. 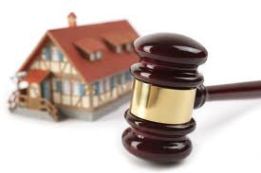 Another interesting aspect of this verse is the location where the Lord’s judgment begins: the Lord’s sanctuary. 1 Peter 4:17 states that, “it is time for judgment to begin with the house of God.” I understand this to mean that those who are most accountable, who stand, as it were, closest to place where God dwells, will come under His judgment first. For us who believe, this judgment will be purification, possibly through suffering, as Peter suggests. For the wicked, who are increasingly distant from God, His judgment means eternal condemnation.

The Lord is returning for a bride who is prepared to meet Him. She will be pure and spotless, made white by His cross and purified through her submission to His careful preparation. Illustrated by the letter “Tav” in ancient Hebrew, her identifying mark will be that very cross.

Are you prepared as a bride should be for her husband? Your sorrow and weeping over the abominations in our Lord’s world, and even in His body, confirm the mark which is upon you. Wear the sign with honor — glorying in it, and carry your cross faithfully to the end, protected from the eternal judgment which awaits all men at His coming.
Your family in the Lord with much agape love,
George, Baht Rivka, Elianna & Obadiah