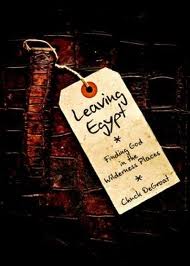 Most of us can identify with the Children of Israel as they came out of the bondage of Egypt to inherit the Promised Land of God.  We identify with their struggles, failures, attempts, and successes.  In fact, we may identify with them too much.  If we identify with them too much, it may well mean we are somewhere lost between bondage and deliverance!  Just because we make the decision to leave Egypt, doesn’t mean Egypt is gone from within us.   The Bible is forever talking about “coming out of Egypt.”  The point is that once you finally are delivered (come out) from Egypt… you cannot easily forget it.  It becomes your testimony of God’s miraculous deliverance.  We will talk about the various meanings and holds Egypt can have on each of us in the next few days.  But for now can you recount the providential ways God moved to secure your deliverance from Egypt?

Paul Harvey once shared the story of an old man who fed the sea gulls every Friday evening.

“It is gratitude that prompted an old man to visit an old broken pier on the eastern seacoast of Florida. Every Friday night, until his death in 1973, he would return, walking slowly and slightly stooped with a large bucket of shrimp. The sea gulls would flock to this old man, and he would feed them from his bucket. Many years before, in October, 1942, Captain Eddie Rickenbacker was on a mission in a B-17 to deliver an important message to General Douglas MacArthur in New Guinea. But there was an unexpected detour which would hurl Captain Eddie into the most harrowing adventure of his life.

Somewhere over the South Pacific the Flying Fortress became lost beyond the reach of radio. Fuel ran dangerously low, so the men ditched their plane in the ocean. For nearly a month Captain Eddie and his companions would fight the water, and the weather, and the scorching sun. They spent many sleepless nights recoiling as giant sharks rammed their rafts. The largest raft was nine by five. The biggest shark…ten feet long!

But of all their enemies at sea, one proved most formidable: starvation. Eight days out, their rations were long gone or destroyed by the salt water. It would take a miracle to sustain them. And a miracle occurred. In Captain Eddie’s own words, “Cherry,” that was the B- 17 pilot, Captain William Cherry, “read the service that afternoon, and we finished with a prayer for deliverance and a hymn of praise. There was some talk, but it tapered off in the oppressive heat. With my hat pulled down over my eyes to keep out some of the glare, I dozed off.”

Something landed on my head. I knew that it was a sea-gull. I don’t know how I knew, I just knew. Everyone else knew too. No one said a word, but peering out from under my hat brim without moving my head, I could see the expression on their faces. They were staring at that gull. The gull meant food…if I could catch it.”

“And the rest, as they say, is history. Captain Eddie caught the gull. Its flesh was eaten. Its intestines were used for bait to catch fish. The survivors were sustained and their hopes renewed because a lone sea-gull, uncharacteristically hundreds of miles from land, offered itself as a sacrifice. You know that Captain Eddie made it.  And now you also know…that he never forgot. Because every Friday evening, about sunset…on a lonely stretch along the eastern Florida seacoast…you could see an old man walking…white-haired, bushy-eyebrowed, slightly bent. His bucket filled with shrimp was to feed the gulls…to remember that one which, on a day long past, gave itself without a struggle…like manna in the wilderness.

This is story is not so much about leaving Egypt, but it is about not forgetting about God’s miraculous deliverance.  Take a few moments today and thank the Lord for your deliverance.

2 thoughts on “Our Journey Into The Promised Land: Leaving Egypt”