What is the final test of greatness as judged by the world?

Little souls are dismayed by difficulties, great souls are awakened by them. Difficulties awaken their courage, stimulate their activities, and marshal their faculties for battle.

God’s greatest men did not just happen. It came in the long, tearful nights, it came beneath the weight of some burden, and it came at the height of the great resistance to their soul. Character was forged in the heat of the furnace.

Application For Our Own Journey into the Promised Land

I think that sometime or another we all get in a hurry to reach the Promised Land, because we become greatly excited about the prospect of being in God’s perfect will and inheriting the Lord’s blessings.

The real problem for most is we usually don’t arrive at the place of our vision or dream immediately. We have to (endure) wait on God’s timing.

In these times of relative calm, God  is sometimes quiet.  It is not because he has abandoned us, but because He is in the process of preparing us and preparing our pathway for what lies ahead.

When Moses was on the mountain it was because God was providing his people with the law, and the law was given in order that the people could prosper.  In Deuteronomy 30:16 God tells us,

“I command you today to love the Lord your God, to walk in His ways, and to keep His commandments, His statutes, and His judgements, that you may live and multiply; and the Lord your God will bless you in the land which you go to possess.”

HERE IS THE POINT:

The thing is, we usually don’t realize that those times of silence are the times when God is either

preparing us or opening some doors for us.  We tend to get frustrated because we are not hearing from God.

When we don’t hear from the Lord, what do we usually wind up doing? We start taking matters into our own hands.  When we take our eyes off of God, we then begin to devote our attention and our effort to something else – something which we have created – and that is considered to be idolatry.

Even if it is something that is done in the name of the Lord, if God has not sanctioned it, then it can become an idol.

One of the greatest errors that we make is to allow the dream to become bigger than the Dream Giver (the title of Bruce Wilkinson’s book). When God says, “Wait,” we tend to say, “Let’s go!”

And when our dream becomes our idol we attempt to open doors that God has sealed shut, and it will be like we are beating our head against a wall.

One of the greatest tests of our faith, in which God will test us to see if we fully trust him is during those times of silence.  We know that God uses silence in order to test us, for in reference to King Hezekiah, we read in 2 Chronicles 32:31,

“God withdrew from him in order to test him, that He might know all that was in his heart.”

“I, the Lord, search the heart, I test the mind, even to give every man according to his ways, according to the fruit of his doings.”

Those times of silence very well might be the time that God is using to prepare the way for us, but

they can also be tests of our faithfulness to worship God alone, and for us to prove that God is the only thing of which we have need.

When God is silent we might feel that He is trying to take away our dream, but as George Mueller said,

“Our heavenly Father never takes anything from his children unless he means to give them something better.”

If, when we do not hear from the Lord, we focus only on God and refuse to strive after the dream, then the Lord will bring our big dream to pass.

At that moment, the very Godhead was focused on Israel’s present needs and their future blessings. Yet, while the Lord was arranging everything for their benefit and inheritance, the people were crying,

“Where is God? Where is His direction? We see no evidence of His faithfulness. There is only silence. What kind of God would leave us alone and afraid, without a word? Enough of this waiting — enough of silence and delays. Let’s take action. Let’s do something!“

So Israel deliberately put out of their minds all the miraculous things God had done for them. They forgot the supernatural plagues He had sent on Egypt. They forgot the Red Sea miracle. They forgot the sweetened waters of Marah and the angel’s food He had given them each morning. Not even the thundering voice at Sinai mattered to them anymore. All that mattered was they were in need and heard only silence.

They were under the spell of unbelief! Nothing could shake these people from their conviction that God was no longer with them. The only thing they cared about was satisfying their inner craving for action!

The Bible says these people literally ripped off their earrings, so Aaron could begin shaping the idol:

“And all the people brake off the golden earrings which were in their ears, and brought them unto Aaron” (Exodus 32:2).

I can almost hear their excited cry as the calf took shape: “Now we’re getting someplace!”

“And when Moses saw that the people were naked; (for Aaron had made them naked unto their shame among their enemies:)…” (Exodus 32:25).

The Hebrew word used here for naked is “para,” meaning, “to loosen up, expose, dismiss all restraint.” It also infers “a new beginning.” The Israelites were saying,

“Things are not happening as they should. We’re tired of this battle, tired of waiting on God. And now we’re going to enjoy ourselves. Out with the old! We want new freedom, a new start – and we want it now!”

Nakedness in the Bible also has to do with not having one’s shield. Every man who didn’t have his shield was considered naked. These Israelites were literally naked — stripped down and dancing before the golden calf.  They also had layed down their armor.

Can you imagine their enemies, the Amalekites, looking down on this wild scene from the surrounding mountains? These Amalekites once trembled at the very sight of Israel. God had put a dread in their hearts toward His people, so that they could never let down their guard.

But now they saw Israel taking off their armor and stripping off their garments. And the Amalekites were mocking and laughing at them!

“Look at them — they’re just like us! Their God has no power. They don’t trust Him. See? They’re throwing off all their strict ways! They want to lust and party and play just like the rest of us. Some holiness! What hypocrisy!”

In that one act of nakedness, Israel belittled their God in the eyes of the ungodly! They made the Lord seem heartless, cruel, uncaring, helpless. They besmirched His honor, His majesty, His omnipotence. They were no longer an example to the world. 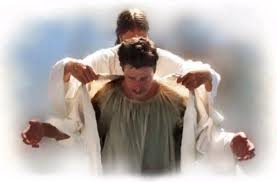 And that is exactly what we do when we strip off our robes of faith and let go of our confidence in God!  Without childlike trust in God, a Christian stands naked before the world — exposed to all doubts, fears, and unbelief!

God Has a Special Plan for You, and He Is Working Out Every Detail — But You Can Jeopardize it!  People do determine greatness by noting what we do in distressing circumstances.  They also note how great our God is by how we respond to difficult times.

How are you responding to life’s circumstances?