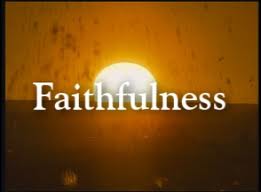 There is another reason God calls us to the desert for times of testing.  In the desert God proves His faithfulness over and over again.

The story of the journey reveals that as unfaithful as the Hebrew people were, God remained faithful.

The Bible reminds us, “If we are faithless, He will remain faithful, for He cannot disown Himself.”  (2 Timothy 2:13)

God remained faithful to his people. He provided them with food and water in the desert. He sheltered them and protected them. He loved them with an everlasting love.

Put your math hat on for just a moment.  Someone calculated the amount of manna the Lord had to provide on a daily and yearly basis to feed the Israelites on their journey from Egypt.

“Now a Conservative estimate of the total number of Israelites who came out of Egypt would be two million.  They had six hundred thousand men able to go forth to war. (Numbers 1:45-46).

An ‘omer’ was to be gathered for every one of these two million souls and an ‘omer’ is the equivalent of six pints. There would be twelve million pints, or nine thousand pounds gathered daily, which was four thousand five hundred tons. It would take ten trains, each having thirty cars and each car having fifteen tons would be needed for a single day’s supply. Over a million tons of manna were gathered annually by Israel.” [Arthur Pink. Gleanings in Exodus. (Chicago, Moody, 1981.) pp. 124-125.]

Was God not generous to them?

God will ALWAYS be there to guide, comfort, and provide. As we lose control, He will be enabled to take control and work out His marvelous will.

Jesus said, “Look at the birds of the air; they do not sow or reap or store away in barns, and yet your heavenly Father feeds them. Are you not much more valuable than they?” (Matthew 6:26).

The desert testings will not last forever, but God’s faithfulness will.