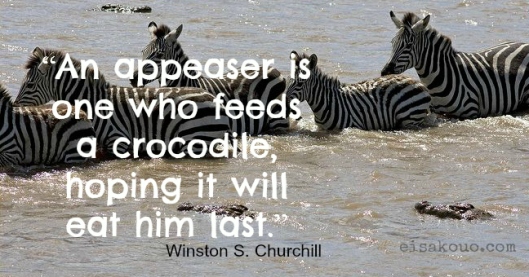 In order to make Deviled Ham you have to get rid of good and also you have to “un-invite” or “dis-invite” Christ from your community.
In the Gospel of Luke, the community could live with a crazy, naked man living in their cemetery, but Jesus Christ had to go. And by doing this, they threw out the only hope their community had for redemption.

We are seeing the same course of action being taken in our communities as well. What is wrong with our nation is not so much the presence of drugs and alcohol abuse or the violence and crime. What is wrong is that there is no Christ and no Christian presence in our communities to offer hope and healing. Real believers are MIA. The ones remaining were neutered long ago, so they don’t act like real believers. Even as I write this, poor little baby Jesus is being kicked off main street on His birthday as though He was loitering. We have become so accustomed to evil and it’s presence, we no longer speak out against it. It many cases it has become illegal to speak out against evil and point the way to redemption.

Have we really made real peace with evil? Will our pact hold? During the years of World War II and the Cold War, there was a word for this — appeasement. Appeasement described the efforts of peace at any cost and of accepting evil. This is what Israel has tried to do … give land for peace. It hasn’t work, nor will it work.

In 1938, Britain and France, still trying to recover from World War I, signed the Munich Pact, which basically said they would accept Germany’s take over of part of Czechoslovakia, as long as Germany agreed not to take any other territory. The policy became known as appeasement, and it didn’t work. Germany eventually took over most of Czechoslovakia, and then a few months later, swept into Poland. World War II began shortly after.

2 thoughts on “How to Make Deviled Ham (II)”