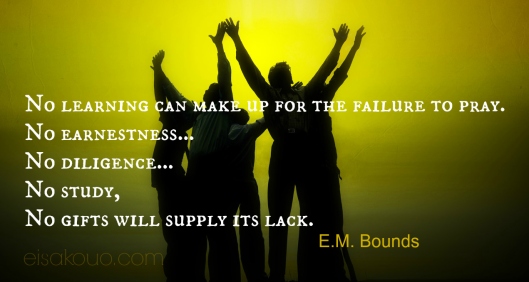 Sometimes we pray because the internal storm is far larger than the storm raging on the outside. Prayer during these intense moments takes on a different purpose. God calls us to stand strong in the face of circumstances which will not change. Have you ever heard this? “Sometimes God stills the storms of the sea – At other times, He stills the storms within me.” The night before Jesus was crucified He had need for the storm inside to be quieted.

Luke 22:41 said Jesus “withdrew about a stone’s throw beyond them, knelt down and prayed.” The word for “withdrew” literally translates that Jesus “was Himself withdrawn”. It was as if Jesus were drawn… physically pulled down on His knees to pray. He HAD to talk to His Father. He HAD to share or release the anxiety of what was being laid upon Him. Jesus would later be just as calm and at ease when He stood before Pilate, Herod, the Sanhedrin, and the people. How could Jesus stand and be rejected, humiliated, and crucified with such resolve?  On the night previous, Jesus prayed it through in the garden.  Someone said, “The battle of the cross was won in the prayer Garden of Gethsemane.”

Jesus’ type of praying is the kind we need to learn. It’s a type of prayer which can give us the ability to face the hard tests of life… because sometimes things are not going to change. When Jesus prayed in the Garden He was brutally honest. There were no religious platitudes, no sugar coating. He knew what was about to occur.

Can we ever be too honest with God? There are people who believe that somehow they’ll offend God by being too honest. From Jesus we learn that sincerity is essential. It brings quick resolution because the Father answers.

Gethsemane means “olive or oil press.” It was a place where olives were crushed and pressed into oil. Jesus’ prayer was a prayer which “pressed into” the Father. The prayer had power to give Him strength because it hinged on accepting the Father’s Will. This is the type of prayer that can transform our times of weakness into times of strength. Why? Because these prayers are the ones which are less concerned with moving God to our will…as they are in moving us toward God.

Billy Graham once wrote: “I watched the deck hands on the great liner United States as they docked that ship in New York Harbor. First they threw out a rope to the men on the dock. Inside the boat the great motors went to work and pulled on the great cable. But, oddly enough, the pier wasn’t pulled out to the ship; the ship was pulled snugly up to the pier. Prayer is the rope that pulls God and us together. But it doesn’t pull God down to us; it pulls us to God. We must learn to say with Christ, the master of the art of praying: ‘Not my will; but Thine be done.’”

The next time you pray make it the type of prayer Jesus prayed. Allow yourself to enter into the press. Instead of dreaming and fantasizing about all the different ways God could answer your prayer, allow the Lord to give you His plans. Your circumstances might not change, but I guarantee you will.