2 Chronicles 32:2-5, bad attitudes, countenance, devil operates like pack of wild dogs, Elbert Hubbard, Emerson quote, Eric Schroder quote, faith lift, garbage from your own mouth, got his house in order, habits, King Hezekiah, not giving the enemy access, patterns of thinking, personal inventory, repairing the broken walls, Samson, scars, the soft areas of our life, using the same old paths, weak areas, what lies behind us, what lies within us, worked hard, wounds or scars 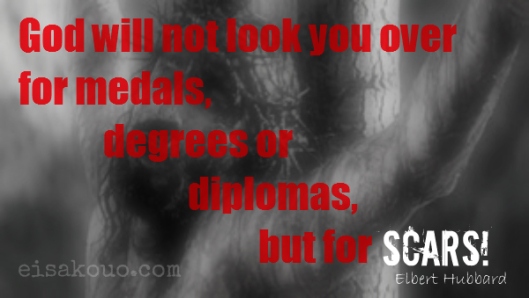 Difficult times and difficult circumstances eventually come to everyone’s life.  The important issue is to know the Lord and follow His voice.  After this is settled, what should we do next? King Hezekiah took a personal inventory and got his house in order. He blocked off the bad, mended the broken, bolstered the weak.  Whatever you wrote down yesterday as the most uncertain issue in your life, apply these three points to it.

Now when Hezekiah saw that Sennacherib had come and that he intended to make war on Jerusalem, 3 he decided with his officers and his warriors to cut off the supply of water from the springs which were outside the city, and they helped him. 4 So many people assembled and stopped up all the springs and the stream which flowed through the region, saying, ‘Why should the kings of Assyria come and find abundant water?’     2 Chronicles 32:2-4

I am sure you have realized it by now, there are some things in our lives that supply strength to your enemy. The enemy of our soul feeds off our own bad habits, attitudes, and patterns of thinking.  These negatives strengthen his resolve to keep fighting. Many people believe the devil can read our minds.  Listen, he doesn’t have to do this.  All he really has to do is listen to the negative garbage coming from your own lips to know what is going on in your life. Your countenance also speaks volumes about what is going on inside you. Many people think they need a “faith lift.” What they really need is to lift their eyes, ears, and hearts towards heaven and gain strength.  If you walk around looking rejected and forlorn all the time, you are going to continue to get beat up by your enemy. The devil operates like a pack of wild dogs. It doesn’t make any difference which dog starts the fight, the dog on the bottom of the pile is the one which gets beat up.  He looks for the easiest victim to conquer.  I didn’t say it was fair.  If you go around looking like you are rejected and defeated… he will oblige you.

You have heard me say Satan doesn’t want to attack you in some new and unproven way.  No, he wants to attack you using the same old paths that are proven and well-worn.  Expect the enemy to gain strength and encouragement from your previous defeats.  He always thinks he can conquer using the same old areas.  This is why we must dam the creek beds and streams, so he has no hope.

In addition, the scripture says in verse six, Hezekiah worked hard repairing all the broken sections of the wall.  Sometimes mending or repairing what was formerly broken in our life is the most difficult task.  These are personal and sensitive areas because battles have been fought in these places. The fact is, these things were once healthy, but now only scars remain. I don’t know what this means for you personally, but I do know this… the passage says they “worked hard” in repairing the breached areas.  Hard work is sometimes necessary!

Do you know what is broken or the soft areas of your life? I am not a big believer in spending a lot of time on past issues, but sometimes we need to go back… not to rehash old issues, but to fortify.  Broken bones and scars can become the strongest areas of our life.

Verse five says “He built another wall outside that one and reinforced the supporting terraces.”

We know from history that the King didn’t wait until the last-minute to do this work, but had been reinforcing it for years.  There are some things in your life that are doing okay right now, but you know if the enemy concentrated on that point, he might be able to break through. Just to make sure, you make the precautionary decision to reinforce those areas of your life. Do you know your weak spots? Everybody has weak spots or vulnerabilities.  These areas over a long siege could be trouble. What are you doing to reinforce it?

Ernst Schroder said, “The optimist already sees the scar over the wound; the pessimist still sees the wound underneath the scar.”  Which do you see… the wound or the scar?  Don’t let your wounds dissuade you from erecting stronger walls.

The Bible says, “Samson loved women.”  It was a fact.  Guess what Samson kept running into over and over again.  Yep…women.  Someone said, “Samson was a He-Man with a She-Problem.” He never took any precautions…he didn’t want anything to change. He was a “player”.  It ultimately destroyed him.  He could have shored up these weak areas anytime he wanted.  He didn’t want to do any work in these areas because he wanted to keep falling into this type of sin. Difficult times are on the horizon.  The time to get our own house in order is now.

a single word of God, blood of Christ, cast your cares on Him, cutting, Dr James Emery White, I bled enough, razor blades, scars, sharp objects inside, suicide, the cross 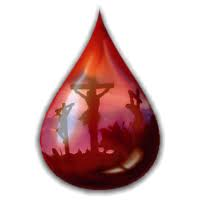 I have done a lot of counseling in my life.  Many times I have wanted to share a story or two but never would do so for confidentiality reasons.  Who wants to see their life displayed in a blog?  A fellow pastor was given permission to share one young woman’s life long struggle with cutting.  It reminded me of power that comes from just a single word of God.   Listen to her story, then I will make a comment or two.  The story comes from Dr. James Emery White.

Just a few weeks ago, on a Thursday afternoon, a young woman came by the office to give me something.  She was going to put it in the offering plate, but decided to just hand it to me.  I was in a meeting, so she left it at the front desk.

On the outside it said, “Jim White,” and underneath, “Be careful…sharp objects inside.”  On the back it read, “I thought I was going to put this in an offering plate but I think it would be best to give you directly.”

I opened the envelope, and inside a plastic bag were razor blades.  And a letter she later told me I could share.

“I have been coming to your church on and off now since I was in 5th grade.  I am now 23…When I was 12 years old I started cutting myself.  Now my arms are covered in an overwhelming amount of scars, but I am proud to say there are no open cuts.  I have not cut for probably a year now, but I still have razor blades that are hidden around my room…

“I quit when I was about to cut one day but heard Jesus in my ear saying, “I bled enough.”  “He took my pain on the cross and I no longer needed to take it out on myself. But I realized by holding on to razor blades I am not fully letting go of the pain and addiction to cutting.  I want to fully let it go now…

“It says in the Bible, “Cast all your anxiety on him for He cares for you.”  So I’m doing that today.  This is an offering plate and I am offering to Jesus today more than any amount of money I could ever offer Him.  These are all my razor blades that I have kept hidden around in different places out of my reach just in case.  I am handing it over to God and I trust you also with this as well.  Thank you for all you and this church have done in my life...”  And then she signed her name.

And now I am holding her razor blades in my hand, instead of her holding them in hers.  And that is why I do what I do.

This story is not unlike many I have counseled as well.  The blood of Jesus is for you and IT IS ENOUGH!  Whether you are a cutter or not, the blood of Jesus covers every issue so you do not have to continue repeating the same destructive behavior.   What a wonderful truth.  Take time today to cast your cares upon Him and surrender yourself fully to His Lordship.